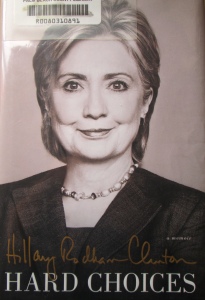 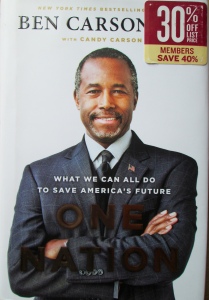 It’s been a busy week in the would-be presidential book sphere.  According to Politico, last week, Clinton sent her rivals in the GOP a copy of her 2014 book Hard Choices.  Apparently, she also sent each candidate a personalized letter saying:

“I understand you and your fellow Republican candidates for president were questioning my record of accomplishments at your last debate, so I thought you might enjoy reading my book, Hard Choices.”

Let the battle of the books begin!  Ted Cruz sent a mocking tweet, Bobby Jindal attempted to stay relevant and get a jibe in about Planned Parenthood, Huckabee is, well, his usual charming self but directed at the email controversy.

But what was really interesting was the response from Ben Carson’s team.  Carson et al apparently posted a video to Facebook showing their team using Hard Choices as a stepstool, a computer stand, and a set of weights.  Obviously it’s insulting.  But why?

Two reasons: first, this goes back to what I was saying the other day about distributed personhood and candidates’ books.  The book is at the same time a representation of the candidate, a product of their career, and a personal stand-in, a kind of physical presence.  What Carson’s team did with the book is almost like a voodoo doll: it’s at once saying that we are rhetorically and politically going to mop the floor with you, and will demonstrate that by physically abusing (and humiliating) your effigy.

Second: this is something I’ve been meaning to point out about Clinton’s book for a while now.  Let me backtrack a bit.  Hard Choices is divided up into sub-sections focusing on a geographical region of the world she interacted with during her time as Secretary.  She starts with domestic politics with her last run for president and appointment to the State Department, then goes on to Southeast Asia (the most innocuous section, maybe), and so on to other areas of the world, saving the most politically fraught for next-to-last and closing on global challenges with fairly upbeat upshots like climate change and human rights.  The funny thing is, each chapter is divided up into almost exactly equal numbers of pages.  These are specific to the section: some sections have 20-page chapters and some have 30 pages chapters, but within sections chapters almost never deviate from the standard length by more than a few pages.

This might say something about the process of writing a political book.  It suggests to me that at the outset, Clinton and her team decided on a general overall length, a list of topics to cover, and then set about writing 20- and 30-page summaries of each topic.  Hard Choices is a hefty book, and it seems that was no accident: rather, Clinton et al set out to write a book that would look and feel weighty, definitive, more substantial on many levels than those of all of her rivals on both sides of the aisle.  I would bet money that the physical being of the book was a goal from the outset.

In this context, Ben Carson and his team making visual jokes about the size and weight of Clinton’s book—about its material presence—shows an awareness of this goal and a desire to make light of it.  It’s pun-ny on a lot of levels, from one political professional to another, and I really enjoy watching this happen.

Both Politico articles on the subject are worth reading.  Check them out here and here.  I’ll be back with some Rand Paul for general consumption soon.

One thought on “Update: Clinton[‘s Book] Used As Stepstool by Ben Carson”